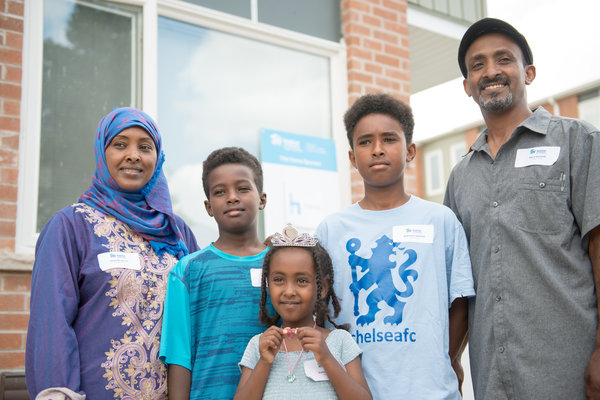 We no longer have to worry about our children’s health and safety, and can finally enjoy the time we spend together inside our home.

Salh and his wife, Zemzam, came to Canada from Eritrea in 1999, hoping for a better life. When they settled in Toronto, the only place they could afford was a 2-bedroom apartment in social housing.

After giving birth to their three children Mubarek (son), Murad (son), and Murwa (daughter), Salh quickly learned that their home was too small for their family to live. They were running out of bedroom space and their home was overly congested.

But the size of their apartment wasn’t the only issue holding them back.

“Our apartment building was poorly maintained”, says Salh. “Garbage spilled into the halls and elevators, and there was constant warnings of bedbug infestations. It was not a healthy environment for my family.”

The neighbourhood was becoming increasingly more dangerous. Salh’s boys love to play soccer, but he was afraid to let his kids play outside. Especially after witnessing a shooting next to their building.

“It was a summer afternoon and my son and I were going for a walk. We heard gunshots”, says Salh. “The person who got shot lived in our building.”

After the shooting, Salh knew his family had to move out of their current housing situation.

They applied to Habitat for Humanity GTA and received the news that they were accepted as a partner family in 2012. “I am relieved that my family will be able to move before my children become teenagers,” Says Salh. With all the negative influences around our old place, we’re so happy to be able to live in a new home in a safe area with other Habitat families.”

The Ibrahim’s live in a Habitat home in Brampton. They have cousins that live near by and are happy to be close to family members. There is also a recreation centre in walking distance for the boys to play sports in a safe environment, and make new friends.

“Moving into our new home could not come at a better time for us”, says Salh. “We no longer have to worry about our children’s health and safety, and can finally enjoy the time we spend together inside our home.”

You can help more more families like the Ibrahim’s.