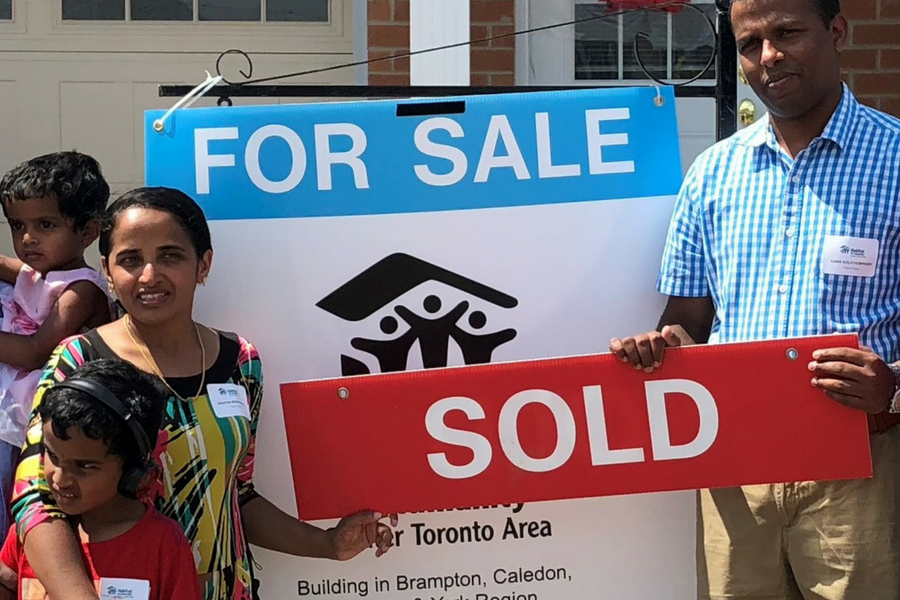 To finally have a permanent place to live and no longer move from one basement to the next, relieves a lot of stress.

The Kolo family became Habitat homeowners at our Kennedy Rd. build project in Caledon in the summer of 2018.

Since moving from India to Canada in 2013, the Kolo family have been searching for a stable home. To make matters more difficult, their son was diagnosed with autism soon after arriving to the country.

“We’ve lived in 3 different places in the GTA during our 5 years in Canada. The transition has been especially tough on our son, Eshan, who was diagnosed with Autism in 2014.”

The first home they lived in was a basement apartment. The basement wasn’t safe and posed threats to their family’s health. Mold ran rampant on the walls, and Eshan was frequently getting sick with respiratory infections. There were no windows to see outside and the basement would get overly cold in the winter.

Living in their basement apartment, Haris and Jishitha observed Eshan was having cognitive development challenges.

“Coming from India, Eshan was developing normally,” says Jishitha. “But with little room for him to play inside our basement apartment, we noticed that he stopped talking. He was completely mute for close to two months. We were worried.”

After taking Eshan to a doctor, he was diagnosed with autism. With no adequate space for Eshan to grow or even see sunlight in their basement apartment, the family decided to find a new place to live.

“Eshan was struggling in our first basement apartment,” says Jishitha. “As parents, we felt like we were not providing a good home for him.”

Jishitha and Haris moved into a new apartment on the main floor of a house. Their home was bigger, with enough room for Eshan to play. But the rent was too high, and they couldn’t afford to save money for their children’s future.

Forced to move out yet again, they settled for another basement apartment. It was all their family could afford.

After receiving the news that they qualified for a 3-bedroom Habitat home in Caledon on Kennedy Rd., the family was overjoyed!

“To finally have a permanent place to live, and no longer have to move from one basement to the next, relieves a lot of stress,” says Jishitha. We will finally have a comfortable home for Eshan, and won’t feel ashamed to have the nurse over for Eshan’s home based therapy.”

By partnering with Habitat GTA, the Kolo family will finally have a stable home – one they pay for with affordable mortgage payments geared to their income. A home that they can grow in together, and build a better future for themselves and their children.