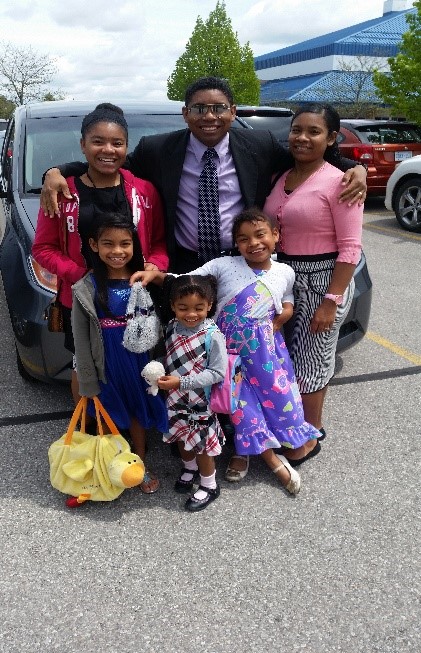 “When our family received the news that we will be moving into a Habitat home at Pinery Trail this summer, we were overwhelmed with joy.”

Osgaldo and his wife, Shirly, moved to Canada from Colombia hoping to build a better life for themselves and their children. Like many newcomer families, they had their initial set of challenges when they first arrived. Especially when it came to finding a decent, affordable place for their family of six to call home.

“When we first moved to Toronto, we didn’t know anyone,” said Osgaldo. “First thing we did was look for a place to live so we can settle down and find work to support our children, but it was really hard to find a place that was in a safe area that we could afford.”

They found an apartment in Scarborough, but it came with its own set of challenges. Due to the cost of rent in the city, their family was spending a majority of their income on housing costs. And after annual rent increases, and providing for their children, their housing situation started to become unsustainable.

“After paying rent, we didn’t have much money left,” said Osgaldo. We couldn’t take our kids for outings with their friends, and we had a limited amount of funds to spend on food. It hurt because we want what’s best for our children, but it was hard to provide with the amount of money we were spending on rent.”

The affordability wasn’t the only issue causing their family stress. They experienced a number of cockroach infestations in their apartment which set them back. Both emotionally and financially.

“Coming from South America, we have never seen a pest infestation like this before,” said Osgaldo. “It was tough on us because we had to leave our house for days at a time, and throw away clothes and furniture, which we couldn’t afford to replace.”

After these incidents, the family moved into an apartment at their church. Around this time, they learned about Habitat for Humanity and their affordable homeownership model and decided to apply.

“When our family received the news that we will be moving into a Habitat home at Pinery Trail this summer, we were overwhelmed with joy,” said Osgaldo. “My children were so excited that they told all of their friends at school, and every weekend they ask to go to the build site to see their new home being built.”