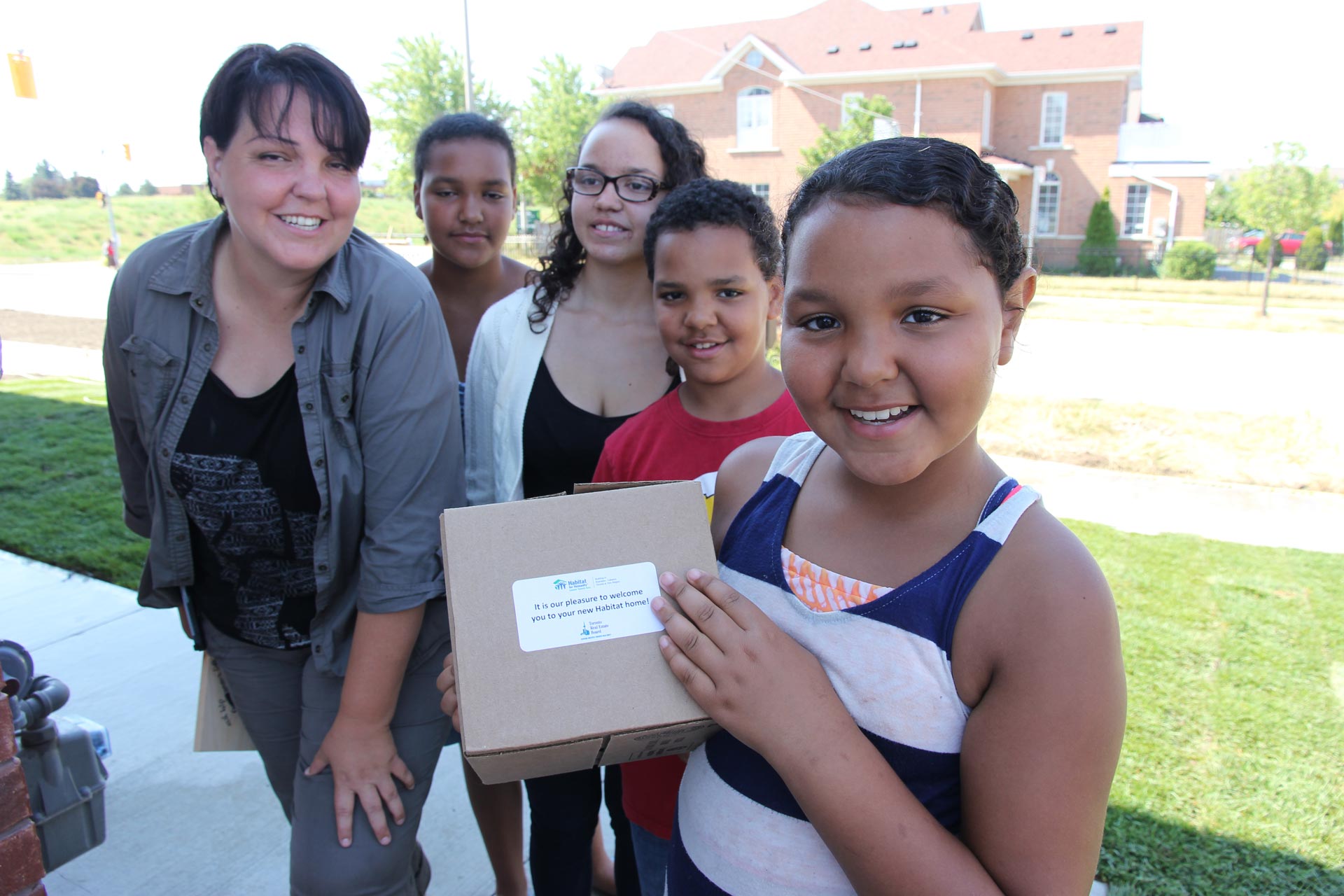 This Habitat home is where my children feel safe to laugh, cry, sing, and grow.

Like many single mothers living in social housing, it was a constant struggle for Sherri to provide a safe and healthy home for her family. In addition to the extremely poor condition of her home that put her children’s health at risk, she faced an uncertain future knowing her home could be sold out from under her.

“I want to have control over the direction of my family’s future,” Sherri explains. “I want to be the driving force that affects whether or not we succeed.”

Sherri lived with her five children in a home that over the years began to deteriorate. Wiring issues made it difficult to keep the house lit at night. And the fridge would frequently lose power, causing food to spoil.

“I had to spend much more than I could afford to feed my children – partly because of high costs, but also because of waste,” says Sherri. “As a parent, just the thought of my children going to school hungry or not having dinner to come home to frightened me.”

Because the windows upstairs did not open, the entire family was forced to sleep together in the living room due to the heat and lack of fresh air. Sherri desperately sought support from her landlord to fix the problems, but nothing changed.

The worst was yet to come.

After all the years of living in substandard conditions, Sherri learned that that their home was being proposed for sale due to the city’s backlog in repairs. “To lose the only home we had – despite its problems – was terrifying for my family.”

This uncertainty about their home and the tough living conditions had a devastating impact on her children. Her eldest son, Alex, became depressed and dropped out of school. Her daughter, Sade, who loved to sing, stopped singing around the house. Jada, Sherri’s youngest, would ask her daily if their two cats would have a place to live if they lost their home.

“There was so much uncertainty in our home. The idea that Jada was frightened that she would lose one of her few sources of comfort was devastating to me.”

Sherri was determined to regain control over her family’s future.

She took time off work to attend City Hall meetings to fight to keep her home from being sold. “To fight for the present when you should be working towards your children’s future is an overwhelming and exhausting experience,” says Sherri.

Sherri’s journey with Habitat for Humanity GTA began two years earlier as a volunteer on a build site with her workplace, who had come out together to build a home. She enjoyed her experience so much that she would visit on her lunch breaks to see the progress of the build and talk to the volunteers she worked with. At the time, she never imagined that in a few years, she would be the recipient of a house like the very one she helped build.

Despite all of her efforts at city hall, her housing situation did not improve. She applied to Habitat GTA, and in May of 2012, she received the news that she had been accepted as a partner family. The letter she received is framed on the wall in her new home on the McLevin site, which she moved into in June of 2016

Today, her life is very different.

She is able to wake up in the morning and go to work without worrying about her children’s safety, about whether she will wake to a broken fridge and spoiled food she cannot afford to replace.

“This Habitat home is where my children feel safe to laugh, cry, sing and grow,” says Sherri.

The impact this home has had on her children is immeasurable. Alex no longer battles depression and has found a job; he even comes home from work with groceries for their family, which melts Sherri’s heart. Sade is singing again and has aspirations of being a performing artist. “The children are proud of their home – they finally want to bring friends over to play.”

Sherri continues to give back, volunteering over 1,000 hours building homes for other families.

“Habitat homes are built out of love, I believe that foundation is giving us a fresh start,” says Sherri. “For all the single mothers struggling as I did, I hope my story provides them with proof that it can get better. There is always hope.”