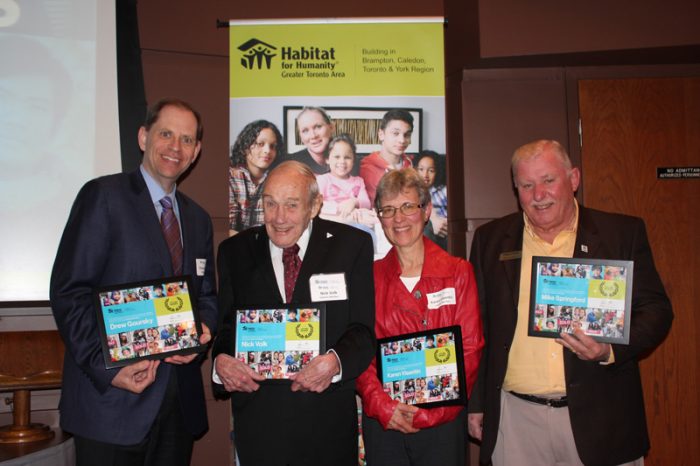 Thank you to the following Lifetime Members for their dedication and support in helping families achieve affordable homeownership. Here’s how each one of these amazing individuals have gone above and beyond with their gift of time.

As a senior bureaucrat for the Region of Peel, Drew was a passionate behind-the-scenes champion for the work of Habitat for Humanity. Ultimately, Drew’s advocacy was instrumental in influencing the Region of Peel to become arguably the most progressive region in Ontario with respect to affordable homeownership, a position which has in turn influenced all three Region of Peel municipalities to be similarly progressive. One very tangible result has been the Region’s commitment to providing $90,000 grants for each Habitat home built which has played a significant role in driving our current growth in Brampton and Caledon.

A former school teacher, Janet was first exposed to Habitat for Humanity through an international build. Inspired to make this happen locally, she came home, put an ad in the local paper, and ended up with a room full of people. The energy Janet created led to the first home being built in 2004 followed shortly thereafter by opening the Brampton ReStore. She has been a passionate advocate for Habitat for Humanity ever since.

Mike is the founder of Habitat for Humanity in York Region. He began his Habitat career by leveraging his relationship with Lions Club International to secure a $50,000 grant that kick-started fundraising for the first home in York. Mike has remained involved with the organization every year since and today, is an active member of our Land & Build Committee as well as an ongoing source of advice to our board and team.

Tom was the first Chair of Habitat for Humanity in York Region and is a former Mayor of Newmarket. After returning from a Habitat build in Ireland with his wife, Kate, Tom became one of the founding members of Habitat for Humanity in York region. Among his significant contributions to our work, was securing not one, but two historical homes for Habitat – one of which today serves as our Habitat offices in Newmarket, the other of which was restored as a Habitat home in Markham. Tom’s commitment to community extends well beyond Habitat for Humanity, and last month, he was named the Town of Newmarket’s 2017 Citizen of the Year.

Karen is a founding member of Habitat for Humanity Toronto. Her passion for Habitat and its mission have simply been beyond measure.

A trained lawyer, Karen has been both a staff member and a Board member of Habitat Toronto. Since the establishment of Habitat GTA, she has remained very engaged with the organization, and continues to provide both pro- and low-bono legal support to our affiliate.