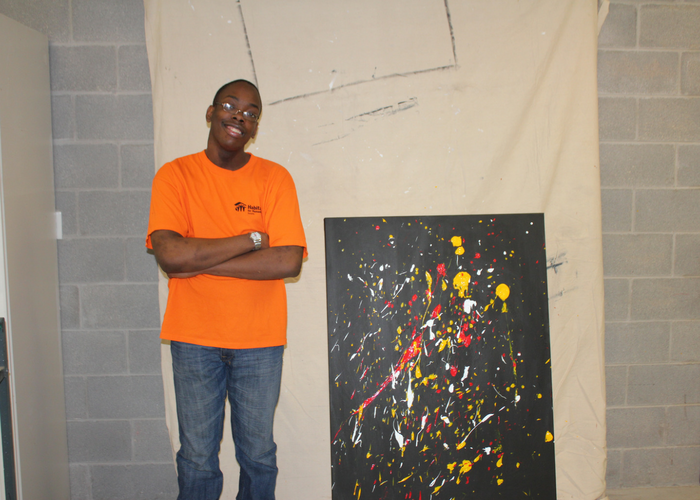 Nicholas comes to volunteer at the East York ReStore every Monday with a smile on his face. Together, with his mother, Sharon, they enjoy giving back to the community through the ReStore. Whether they are lifting and moving donations, helping customers, or interacting with fellow volunteers, it means so much to them to volunteer together and feel a part of the team. Growing up, it was not easy for Nicholas to fit in.

As a young child, Nicholas’ speaking skills developed slower than other kids his age. At age 6, their doctor told Sharon that Nicholas had autism. Since receiving the news, his family has done everything in their power to ensure Nicholas lives a normal life, inside and outside of school.

Living with autism was challenging for Nicholas. He struggled to keep up in school. It was a constant battle to have Nicholas included in regular classes, he was often given inadequate support and assistance. His family had to advocate for him every step along the way. This was very tiring for Nicholas’ family. All they ever wanted was for Nicholas to feel accepted and be provided with the same opportunities that children his age received.

Volunteering at the ReStore helps bring normalcy to Nicholas’ life. Beyond his regular volunteer duties, Nicholas has the opportunity to follow his artistic passion at the ReStore. When a staff member discovered his love for painting, he put a brush with acrylic paint in Nicholas’ hand and a canvas in front of him and taught him how to paint abstractly. Nicholas was so grateful and quickly picked up the art form. His paintings are now hanging on the walls of the East York ReStore and brighten people’s day. Now he spends part of his Monday shifts working on his art. The plan is to sell his paintings in support of Habitat GTA’s mission, empowering both Nicholas and future Habitat homeowners. Nicholas is now following his passion in a supportive environment, interacting with people his age and contributing to the community.