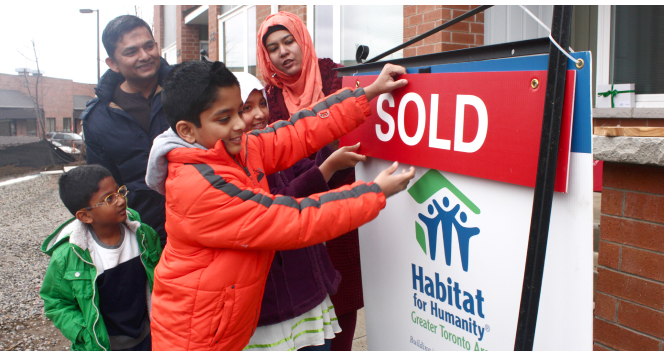 In November, Habitat for Humanity GTA presented 18 more families with the keys to their very own Habitat homes, giving them plenty of time to get moved in and prepared for the holiday season.

On November 7, nine families celebrated a new chapter in their lives at our Birchmount Road Home Dedication ceremony in Scarborough surrounded by almost one hundred community supporters, enthusiastic volunteers who helped build the homes, sponsors and donors, who gathered to wish the families well. This project, consisting of eight two-story semi-detached homes and one detached home, was constructed on what was previously City of Toronto surplus land.

As part of the Birchmount Home Dedication, Habitat for Humanity GTA’s Safety Program Sponsors, Enbridge Gas Distribution, First Alert and CSA Group announced an expansion of the program, which has provided safety support to Habitat GTA build sites, ReStores and offices since 2013.  From now on, all new Habitat GTA homeowner families will receive a First Alert Fire Safety Kit complete with home fire extinguisher, carbon monoxide detector and smoke detector, as well as educational information and a fire safety video when they move into their new homes.

Following the Birchmount dedication, the crowd gathered to witness the naming of the laneway where the homes are situated in honour of long-serving former Board Chair of Habitat for Humanity in Toronto, donor and supporter, Jean-Francois (J-F) Courville, Executive VP and COO of RBC Wealth Management.

“I am deeply honoured to be recognized by Habitat GTA in this way,” said Mr. Courville. “I know that Courville Drive will be a place where these families will thrive and make happy memories for years to come.”

At the Torbram Road Home Dedication ceremony on November 29, where nine families moved into their new townhouses, Thomas Fischer, Habitat for Humanity GTA’s VP of Regional Development acknowledged the enthusiastic and crucial support of the City of Brampton and Region of Peel saying that, ”Their exemplary contributions are about more than just funds, it’s an investment in affordable homeownership and in a new community.”

The Torbram Build project consists of 18 townhouses in total; which will be completed in 2017.

Aftab Malik, his wife and four children were among the nine families who became homeowners that day. Speaking on behalf of the other Habitat families, Aftab said, “We came here from Saudi Arabia for a better life.  But it was hard.  For many years, we have lived in a crowded, basement apartment.  No family should have to live in a basement apartment like the one we lived in.  Now it is so different for our family.   Our children are so happy.”

The Home Dedication at Birchmount Rd. and Torbram Rd. bring the total number of Habitat for Humanity GTA homes built in 2016 to 26.  “We are so thankful to everyone who has helped us to accomplish this task over the past year,” said Ene Underwood, CEO of Habitat for Humanity GTA. “And we’re excited to get a number of new builds underway in 2017, so that we can help even more GTA families who have been waiting many years, realize their dream of an affordable home.”